According to historical records, the first meteorological data are due to the Danish botanist and naturalist A.S. Oersted, who in 1846 began a geographic exploration in the country, true feat at that time. He toured from Puntarenas to Moín, and Alajuela to San Juan River; he also made ascents to the volcanoes. His research was published in Copenhagen in 1863 and served previously for the description of the country in the "Cosmos" act, of the German Alejandro Humboldt. Oersted made the first description of the climate of Costa Rica, although its data differ from those observed by other subsequent naturalists.

Oerted deduced in 1847, an average annual temperature of 16° C for Cartago, with a minimum of 13° C in January. He also made the first measurement of rain, very similar to the current average, and the temperature of San José. After Oersted, it took twenty years without observations, with the exception of the descriptions of the Germans, Wagner and Scherzer, which indicate that San José temperature not low 17° C or exceed 25° C and average is not away from the 20° C.

Because of the scientific development , in the mid-19th century the interest of establishing a meteorological observatory is generated in the country, this idea was liderad by Dr. Fernando Streber in 1873, but it is materialized a decade later. However, the Bureau of Statistics included from its origins (1861), the collection of meteorological information as one of its primary tasks. This situation encouraged the participation of Costa Rica in the first International Network of Meteorological Data in 1877.

To 1887 set the first National Meteorological Observatory, under the direction of the Swiss scientist Dr. Henri Pittier Dormond, one foreigners who was called "Sage", graduated in Switzerland as a geophysicist, civil engineer and doctor in sciences.

However, it was not until April 7, 1888 that is published in "La Gaceta", the creation of the National Meteorological Institute (NMI) and Pittier is named Director, who was also appointed as Professor at the "Liceo de Costa Rica", so at the same "Liceo", began to operate the NMI. There began the first systematic observations of rain and temperatures of San José and the climate study of the country. 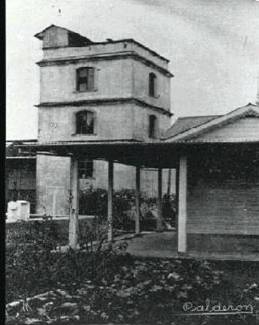 The creation of the institution was driven by don Mauro Fernández, lawyer, economist and educator, reformer of education in Costa Rica, Minister of Finance and Public Instruction, soul and inspiration from the Government of don Bernardo Soto, President of the Republic between 1885 and 1889.

In his administration, Dr. Pittier, linked to Costa Rica to the International Meteorological Organization (IMO), to assume the representation of the country in the Meteorological Congress of Paris in 1889. On his return, Pittier restructured the observations program, based on international regulations.

Files and memories of the NMI recorded the names of nationals and foreigns, who kept alive the scientific interest in atmospheric phenomena and not allowed that registration of meteorological observations is interrupted, even though an official decree was intended to close it at a given moment in its history ".. .by economic reasons."

In 1936, the Geographical Institute was closed due to lack of budget. The meteorological instruments were moved to the National Department of Agriculture of the Ministry of Promotion, located in "San Pedro de Montes de Oca", where today is located the Rodrigo Facio University City, and there is continued making meteorological observations.

From 1944 and having already built the University of Costa Rica, in the Barrio González Lahmann was again created the Meteorological and Seismological Service as a dependency of the new National Geographic Institute, always within the Secretariat of Promotion, now Ministry of Public Works and Transport. Dr. Jose Merino and Coronado became his manager. With him is an attempt to establish and experience with the short term weather forecast. All the information was received initially by radio, then, with the advance of technology, by teletype.

Meteorological and Seismological service was directed from May 1948 to 1968 by Mr. Elliot Coen Paris. He was the architect of the restructuring of the Meteorological Service, and moved its headquarters from the University building to the northeast of the National Museum, also , managed that the country engage in relations with the World Meteorological Organization (WMO), starting as a State member of that body in 1958. 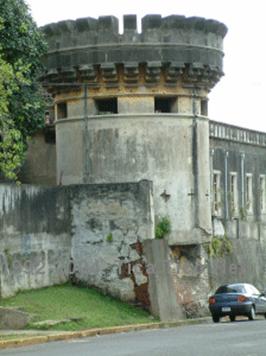 Since the early, Coen performed a large number of publications on the climate of Costa Rica, as well as the first mapping of rain, temperature, sunshine and others. This Statistical Atlas published by the General Directorate of Statistics and Censuses in 1953, offers an overview of the climatology in the country, with classification of climates, maps and graphics from different regions of the country.

In 1963, motivated by the effects of the eruption of "Irazú" volcano and floods of the "Reventado" river in Cartago, it was negotiated the acquisition of an important weather instrumentation, including a radar. In 1968 Mr. Coen is removed and the Eng. Luis Vives replaces him.

Until 1968 the Meteorological and Seismological Service or rather its director, develops a multifaceted activity: meteorology, astronomy, seismology, oceanographic aspects such as tides and even the official time.

This universal or encyclopedic nature given to the institution or its director, turned to the director in a person of much prestige to the public. For this reason, directors were well known personalities and should personally explain the press and radio, more diverse natural phenomena occurring as: storms, droughts, sudden changes in temperature, tremors, eclipses, comets and others.


From 1968, the Department of Physics of the University of Costa Rica began training in meteorology , and in the same year is designated as one of the regional centres of vocational training of the WMO, supported by the United Nations Development Program (UNDP). Through this initiative that the country has a professional Weather Service.

From 1970, and with the support of the Central American Hydro-meteorological project, sponsored by the WMO, the measuring equipment was renewed, was installed a basic network and six synoptic stations with programs of observation of 12 hours a day. In this way the NMI recover and purged the meteorological data in a database.

In 1973, through the Law 5222, the National Meteorological Institute (IMN) is created, attached to the Ministry of Agriculture and Livestock, and assumes your address Lic. Gerardo Lizano, one of the first graduates in meteorology of the UCR. Since 1975 the central offices are located in the "Aranjuez" neighborhood.

Subsequently, the Law 7152 of 1990, moved to the IMN to the Ministry of Natural Resources, Energy and Mines (MIRENEM), which from 1995 renamed Ministry of Environment and Energy (MINAE) as an assigned address. 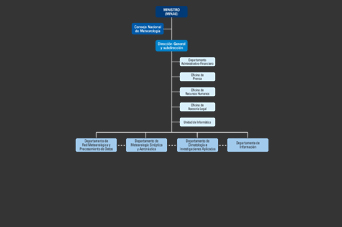 Clicking on the banner , you can access all information related to the internal structure of IMN.