A storm requires several key ingredients to their formation, which usually may occur on a recurring or infrequent basis depending on the weather season of the year. These features are described extensively in the section:

Formation of a storm

Important elements for the formation of a storm

A storm is a local weather system with a cumulonimbus cloud that produces thunder, lightning, strong wind gusts, heavy rain and sometimes hail. If storms are categorized according to their size, structure, duration and intensity, we can identify three types:

In Costa Rica such phenomena are quite common, except the supercells, because in the tropics only occur under extraordinary conditions, however their study is important because they cause dangerous severe weather conditions. According to the definition of the National Weather Service US, severe local storms produce tornadoes, winds minimum of 25 ms -1 and hail at least 25 mm in diameter. In addition to this, there are three phenomena of high importance derivatives storm types described above which are:

Downdrafts from the storms (microbursts) Tornadoes and waterspouts Thunderstorms

Finally, it presents a summary of the influence of tornadoes that occur in Costa Rica, which have not been tornados properly speaking in a vast majority of cases, however, given the limited possibility of documenting them visually, it was decided to consider the testimony of those who lived and so described . This situation will change as technology advance and a better way to document such storms.

Influence of tornadoes in Costa Rica 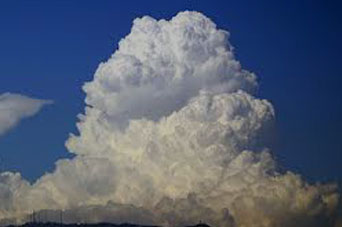 Everyone at some point have directed the view to the sky and observed the clouds. You have seen them dark, white, thin, dense, others that produce thunderstorms, lightning, hail and up to imagine well known figures.